About the Olympian Odes of Pindar

The lyric poet Pindar has composed four groups of epinician (triumphal) hymns, addressed or referring to the winners of the four major Pan-Hellenic contests. In particular, the Olympian Odes concern the Olympic games in honor of Jupiter, the Pythian ones the corresponding games in Delphi in honor of Apollo, the Isthmian the games that took place at the Isthmus by Corinth in honor of Poseidon and finally the Nemean Odes praised the victors at the games of Nemea, also honouring Zeus.
As a whole, the surviving epinician hymns number 45. Fourteen of them are dedicated to Olympic victors, the winners of the most important pan-hellenic athletic event taking place every four years. The first Olympic Games were held in 776 BC.
Each of these odes had the structure of simple strophes in metrical correspondence, or the structure of strophic triads in the form of a strophe – antistrophe + epode. The epode had a different metre than the first two. The longest epinician is the fourth Pythionic, which consists of 13 strophic triads.

You can follow both the original Greek text or an English translation online at the Perseus Library, or at Archive.org for the Greek text accompanied by one version of the metre for each Ode.

Typical structure of the Pindaric Ode

The Olympian Odes of Pindar, like all of his epinician hymns, start with a preamble, usually containing an invocation to a deity or personified idea. Following, reference is made to the name and origin of the victor, then to the sport and the location where the contest took place. At the same time, past victories of the winner or those of his family members’ is celebrated. In the main part of the hymn, a mythological narrative is presented or reinterpreted, and the poet concludes by expressing his personal thoughts as well as wishes for the athlete’s future victories.
According to Pindar, the achievement of victory requires the combination of three key factors: divine favour and assistance, inherited virtue and personal effort that will activate the inherited predisposition. Though, as glorious as a past might have been and, as many good possibilities a man might have, he cannot reach victory without personal effort and labour.
Finally, with regard to the language in the hymns of Pindar, it is the Doric dialect, with some elements from the Aeolic and a few of the Boeotian dialects.

One should not forget mentioning the victors who inspired Pindar to compose his 14 Olympic Odes, however little these names mean to us today.

Pindar (Greek: Πίνδαρος) was born in 522 or 518 BCE in Cynoscephalae, a settlement near Boeotian Thebes. He mentions that his birth coincided with the feast of the Pythians, while his death was unknown. According to researchers of his works and based on his latest surviving poem, he must have died around 446 BCE.
Pindar was shaped as a poet both in Thebes and Athens. He dealt with choral lyrical poetry and from his surviving works the epinician odes occupy a major place. The epinician odes are choral chants recited at the venue of the Games or in the winner’s hometown in celebration of his success.

The recording contains the complete, unabridged Ancient Greek text of the Olympian Odes of Pindar.
After purchase you will be able to download the zip file, containing both mp3 and m4b formats. The m4b smaller, bookmarkable and offers better sound quality.

You can listen to the first 15 lines of the 2nd Ode, an audio sample of the present audiobook. Please, click on the play-button bellow and, if you wish, follow the Ancient Greek text lower on the page, or alternatively watch the video. Thank you! 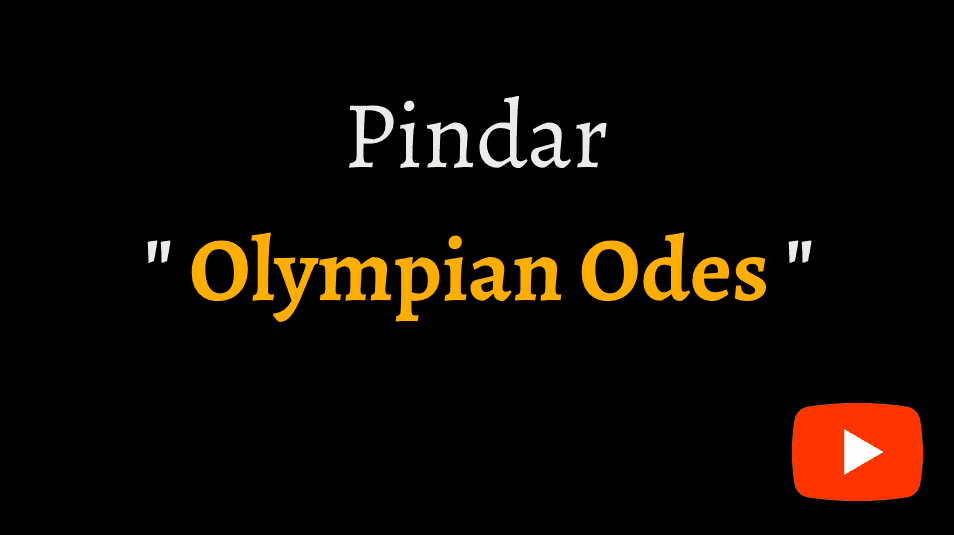