About Plato’s Apology of Socrates

All the works of Plato (Gr: Πλάτων) are dated as having been composed after the death of his teacher, Socrates (Gr: Σωκράτης), in 399 BCE. The first one is the “Apology,” which was probably written around 397 BCE. Plato mentions himself as being present at the event, thus reinforcing the historical character of the work.
The charge against Socrates concerns introducing new deities and the corruption of the youth. Socrates used to mention his “Deamon” (Gr: δαιμόνιον), an inner voice which prevented him from various acts. Despite the tolerance to other religions at that time, his accusers, Anytos, Meletos and Lykon, try to ascribe to Socrates disrespect to traditional values and accuse him of trying to introduce or impose his own deities on the city. The second charge against Socrates, concerning the corruption of young people, perhaps arises from Socrates’ relationship with people who had joined his circle and greatly harmed the city, such as Alcibiades, Charmides and Critias. It is worth noting that the systematic avoidance of formally addressing the court as “Judges” (Gr: ἄνδρες δικασταί), using instead “men of Athens” (Gr: ἄνδρες Ἀθηναῖοι) throughout almost the entire extent of the discourse, shows Socrates’ view of the inability of these judges to judge this kind of matters, without, however, questioning the general institution of the court.
Also in this “Apology”, by Plato one here and there does realise a boastful manner of speaking to the jury (Gr: μεγαληγορία), in which Socrates expressed himself. Seemingly on purpose…
The integral text of Plato's "Apology of Socrates" is online available at the Perseus Library, or archive.org and many other places, often translated as well.

Plato, the great philosopher of antiquity, is the best known disciple of Socrates and teacher of Aristotle (Gr: Ἀριστοτέλης). He was born in Athens in 427 BCE and descended from an aristocratic family. His father descended from King Codrus, (Gr: Κόδρος) while his mother was related to Solon. Thanks to the financial situation of his family he received a wide education and aspired to engage in politics. However, he gave up this desire, as his uncles Charmides (Gr: Χαρμίδης) and Critias (Gr: Κριτίας) were among the Thirty Tyrants. What, however, marked Plato’s life was his acquaintance with Socrates, at the age of 20. He remained by him for 9 years, and after the death of his master in 399 BCE he fled to the city of Megara..

Socrates gives three speeches in the “Apology”, refuting the accusations, especially making his points and addressing the jury after his condemnation is definitive.
The work starts after the accusers have spoken, with an introductory Prologue, where Socrates sets the tone and presents himself. Existing old prejudices are to be handled first, which form the root of the accusations against him. They stem from a Delphic oracle, claiming he’s the wisest of men, which he tried to prove wrong, since he considered himself a very ignorant man. Trying to find a wiser man, he started questioning various people, among them strong and famous ones, who proved not to possess deep understanding of their own matters. Finally, he concludes that the oracle implied that being aware of one’s own ignorance is (human) wisdom. This testing process creates resentment from people and consequently a bad reputation.

Specific charges made presently by his accusers, (demanding his death), of corruption of youth and impiety, are answered in the dialogue between Socrates and Meletus (Gr: Μέλητος), which shows how absurd the accusation is.
Among other things, Socrates says that his young followers imitating his example, do it willingly and not because he claimed to be a teacher, nor did he teach for money, but willing to help everyone seeking the truth.
Regarding the accusation of impiety, Socrates wonders how is it possible to be an atheist, when he -as the accusers claim- venerates and tries to introduce his own, new deities? After the epilogue of the first speech, a vote is taken and Socrates is found guilty by a small margin.

The second speech goes about the proposed penalty. The accusers demand the death penalty and Socrates can propose an alternative one. As he finds himself not guilty of anything, but on the contrary, a benefactor of the city, he thinks that free meals by the city for the rest of his life is proper, according to value.

The third part is Socrates’ reaction to the condemning vote of the court. He declares that he is not afraid of death, since he considers that he has ever done the right things and certainly hasn’t caused any of the evils for which he is been accused. He refrains from the usual dramatic calling of friends and relatives to his defence, as he stands out from the crowd.
He then addresses the jurors who voted against him and finally the ones who voted in his favour.
He closes his discourse spectacularly and masterfully, one could say, with the phrase: “but now it is time to go, I to die and ye to live; which of us go to a better lot is unknown to all but God…»

The recording contains the complete Ancient Greek text of the Apology of Socrates by Plato. The I. Burnet edition of the Greek text has been used, with a few minor deviations, that is, alternative readings included in the apparatus criticus of Burnet, which made more sense in context.
After purchase you will be able to download the zip file, containing the audiobook in mp3 format.

You can listen to the first chapter of the Apology, the “Prologue” as an audio sample of the present audiobook. Please, click on the play-button bellow and, if you wish, follow the Ancient Greek text lower on the page, or alternatively watch the video. Thank you! 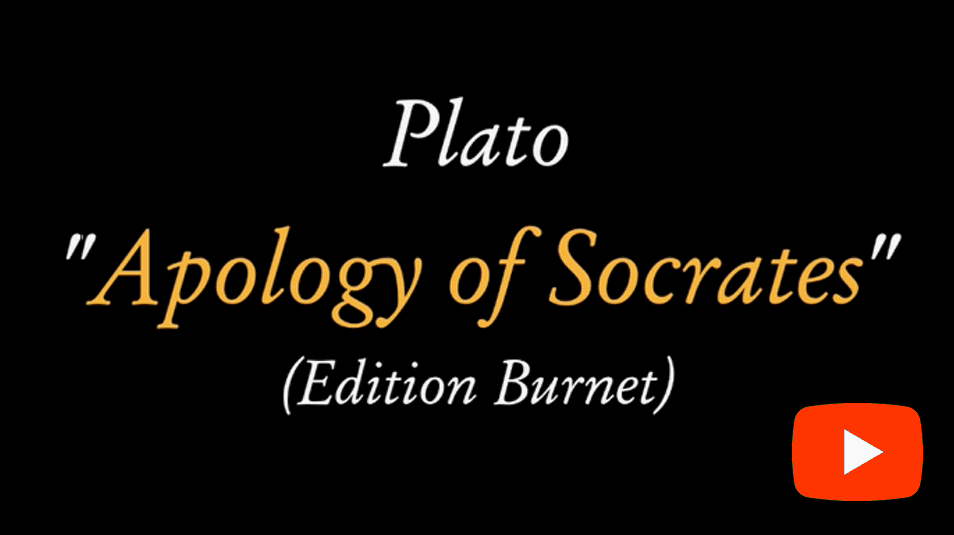 Add to Order / BUY Gift it