The Batrachomyomachia (“Battle of Frogs & Mice”) (Gr. Βατραχομυομαχία) is a play in the typical form of an epic poem – a parody of Homer’s Iliad in hexameters. Within ±300 lines of verse a raging battle unfolds among the marsupial frogs against the surrounding mice.
Despite the humorous character of the epic “thriller”, many of the classic Homeric motifs are met here. First, in the preamble, the poet invokes the Muse(s) to help him recite the events of this war, while the typical corresponding adjectives (e.g. Ares the “noisy warlord” / “fierce warrior”) how could it be otherwise, are of course also present. In addition, the typical hospitality ritual is there (the self-introductions of the two “kings”, the question on the reason of visiting, the offering of expected and proper rich gifts), as well as the advent of the messenger with the staff declaring war, the participation of the gods and the description of the events of the battle, all of them in the Homeric way.
This work is attributed to Homer, but according to the Suda it’s composed by a certain Pigres, who is also confused with another person carrying the same etc, as it’s often the case with ancient authors…

It all started with the good intention of the frog king (Physignathos) to host the accidentally passing-by mouse king (Psicharpax), who happened to drink water in his area. The frog king invites the mouse king for a ride to his palace – on his back, over the waters of the lake. However, the course becomes fatal for the mouse, as a water snake appearing on their way awakens fear and panic. The king frog dives into the depths of the lake, avoiding the dangerous contact, but leaves his guest alone. The unlucky mouse, ignorant of swimming, is gullibly drowned.

This was the cause of the fierce conflict. The mice declare war through their messenger. The frog king denies the responsibility for Psicharpax’ death and summons his soldiers to arms.

In this war, as in the Iliad, the gods are following the events. Jupiter summons a council of the gods – also a typical pattern in Homeric works – initially deciding to keep a neutral stance.
While the mice are overwhelming the frogs, the losses are huge on both sides. The gods participate …emotionally, but now decide to intervene and, after a short talk with Ares, Zeus launches his lightning in the hope of ending the fight, alas without effect. The solution ultimately comes with the entrance of a crabs’ army, which decimate the mice and force them to flee out of necessity at the end of the day.

If this work is really by Homer is doubtful. It most probably is a product of the Hellenistic period, at any case later than the 6th–5th c.BCE. On the other side, it shows the continuous dominance of the Homeric influence, by the use of his poetic style even in small scale comical creations.

One of the interesting things of the Batrachomyomachia is the choice of names of the warring parties, as well as the characteristics describing the crabs, which end this whole one-day-long fight (an indirect intervention of Zeus, in a quasi animal “ex machina” way).

You can read the commentary on this work, at the excellent sententiae antiquae blog, follow the text online with a translation in English (plus comments) also at the batrachomyomachy page of "sententiae antiquae", or Bibliotheca Augustana, or even better get the printed book (authored by Joel Christensen & Erik Robinson). There is also a whole lot of drawings inspired by the Batrachomyomachia here. 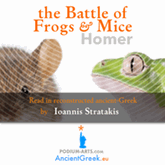 The recording contains the complete, unabridged Ancient Greek text of this work. After purchase you will be able to download the zip file, containing both mp3 and m4a formats. The m4a format offers better sound quality.

You can listen to the opening 13 lines of the Batrachomyomachia, as an audio sample of the present audiobook. Please, click on the play-button bellow. Thank you! 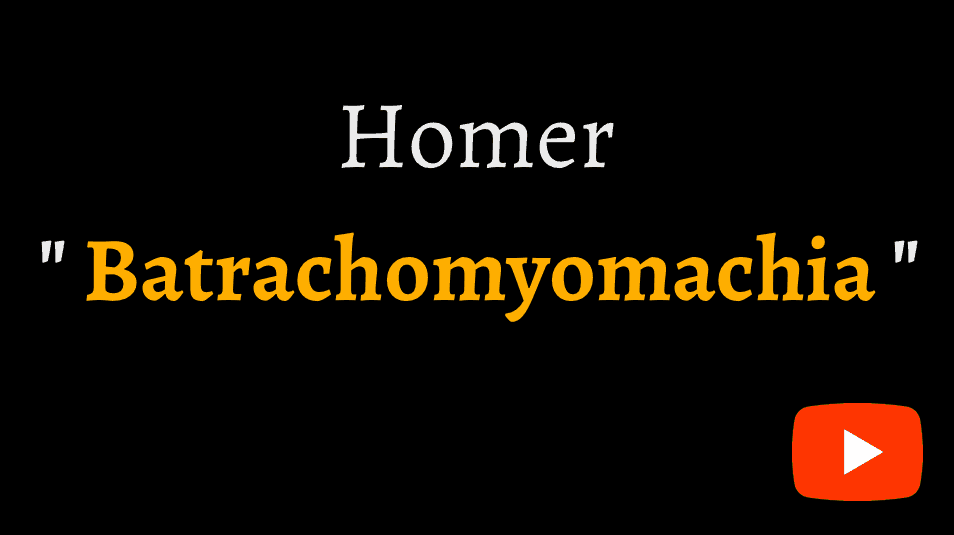