About “Characters" by Theophrastus

This rather entertaining work begins with a prologue, in letter form to a certain Polycles, explaining the reason for writing the "Characters". The reasoning and style of this prologue, though, don't agree with the main text, letting most philologists in doubt about its genuineness. But, since it is traditionally part of the work, it is included in the audiobook, as well as a small number of concluding texts of moral advice most probably stemming from the Byzantine period (characters 1, 2, 3, 6, 17 and 29).
Speculation about the initial form, nature and purpose of the "Characters" led to various opinions. E.g. that it has been a section of the (lost) works on Rhetoric, on Comedy or Ethics of Theophrastus, annotations supporting a major work on Ethics similar to Aristotle's, preparatory notes for Theophrastus' teachings, or examples for his students of rhetoric. Aug. Rostani suggested (1920) that this work is related to Aristotle's "Poetics", namely describing certain vicious characters who would work fine in comic plays. In this way it can be seen as a partial supplement of the "Poetics".

You can follow the text of Theophrastus' ”Characters" (Greek with a parallel English translation) here, (the .pdf file is downloadable) or at Archive.org in an English translation only.
Interesting is also an article on this work, by Eva Ceulemans. You can read it at Academia.edu

Theophrastus (Gr.: Θεόφραστος), was born in Eressus of Lesbos, also the birthplace of the poetess Sappho, in 372 BCE. He studied there under Leucippus and later went to Athens, where he studied in the Academy. When Plato died, Theophrastus followed Aristotle at the Lyceum, who saw and admired the mental abilities of the young student. Because of his eloquence Aristotle gave him the name Euphrastus and later Theophrastus (his real name having been Tyrtamus). When Aristotle left for Chalkis, Theophrastus took over his teacher's rich library and the direction of the Peripatetic School. He lived a long and glorious life, but expressed some sorrow too by saying that nature is not fair, as people die when they start to really learn/understand.
According to a titles' list in his biography, he has written around 240 works, on various matters and themes parallel to his teacher's Aristotle. Among others metaphysics, politics, psychology, ethics, logic, rhetorics, zoology and botanology. Only three of his works survive, two about plants and the "Characters", the work wherefore he is known even today.
Some words can be found at the relevant online entries of Britannica, Stanford Encyclopaedia of Philosophy, Hellenica World. 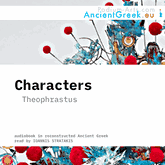 The recording contains the complete, unabridged Ancient Greek text of the 30 “Characters”, by Theophrastus. After purchase you will be able to download the zip file, containing the work in mp3 and m4b format.

You can listen to the 12th "Character", an audio sample of the present audiobook. Please, click on the play-button bellow and, if you wish, follow the Ancient Greek text lower on the page, or alternatively watch the video, which is provided with a quick translation in English. Thank you! 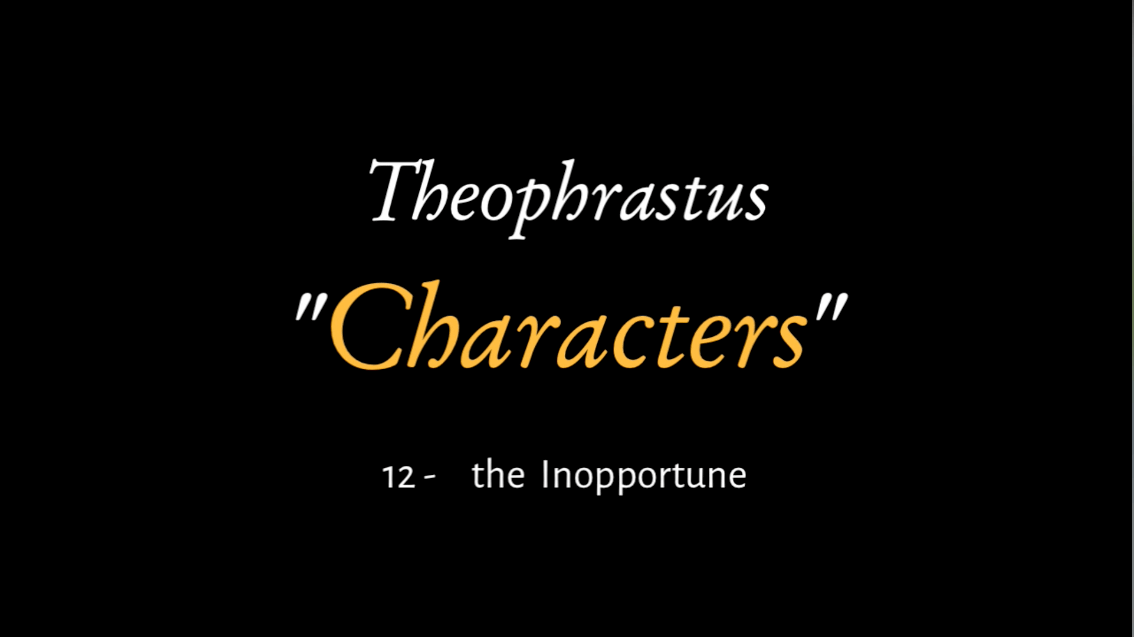