About rhapsody 3 of the Iliad

After we've heard who are the warriors of both Greeks and Trojans in the 2nd rhapsody, the opposing armies are in the 3rd rhapsody ready to face each other in battle. The Trojans proceeding with a lot of noise, the Achaeans walking fast but silently through the plain. Leading the Trojan army from the front is Paris (often called Alexander in the Iliad and elsewhere; Greek: «Πάρις, Ἀλέξανδρος»), who provokes the best of the Achaeans to fight. As Menelaus (Greek: «Μενέλαος» here pronounced "Menélawos" «Μενέλᾱϝος») sees him, comes to the front. Paris is terrified and immediately dissappears within the Trojan ranks.

His brother Hector (Greek: «Ἕκτωρ») is not happy to see Paris cowardly recoil and reproaches him, whereupon Paris proposes to let a duel with Menelaus decide over the outcome of the war, as well as the future and stolen fortune of Helen. This is accepted by both Achaeans and Trojans, but Menelaus requests that Priam participates in the sacrificial oaths because "his sons are not trustworthy" for securing the agreement.

As the fihgting parties lay down their weapons and sit around the duelling space, messenger of the gods Iris (Greek: «Ἶρις» here pronounced "Wîris" «Ϝῖρις»), in the form of a beautiful daughter of Priam, calls Helen to the city walls, where she can watch her former and current husbands duel about her. Helen's impressive appearance generates comments among the people present and Priam asks her to sit next to him. She does so and gives him information about certain leaders of the Greeks when Priam sees them.

After the sacrificial oaths are performed Paris throws first with the spear, followed by Menelaus. Paris misses and Menelaus seems to be winning, when Aphrodite saves Paris' life by enshrouding him in a cloud, carrying him in the chambers with Helen. She too is been carried there by Aphrodite (who has assumed the form of a beloved old Spartan slave) though against her will, as she's longing her former husband and life in Sparta. Helen reproaches the old woman/Aphrodite and afterwards Paris, for his cowardice but the scene ends... in the nuptial bed.

After Paris has disappeared and neither Greek nor Trojan seems to know where he is, Agamemnon proclaims his brother Menelaus the winner and demands that Trojans abide by the agreement. 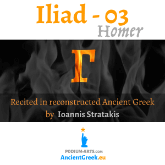 The recording contains the unabridged Ancient Greek text of the 3rd rhapsody (ed. M.L. West).
This recitation is trying to find a balance between dramatisation and metrical correctness. I’ve avoided excess on both sides: not to render it as mechanically rhythmic as it usually happens in educational context on all levels and, not over-dramatise it, as is often needed in live performances in larger venues. I hope this is a proper approach for this medium. 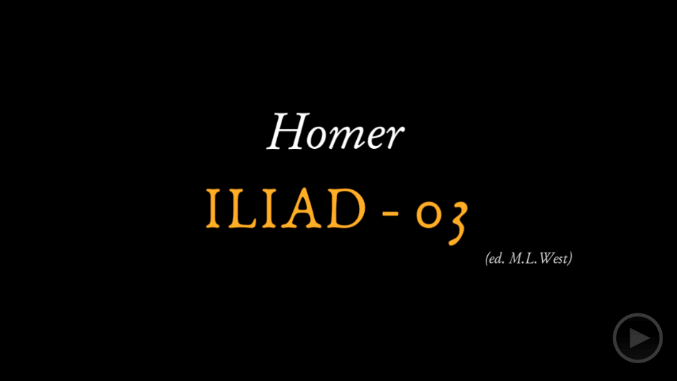