About rhapsody 07 of the Iliad

Hector's and Paris' (Alexander) return to the battle field revives the morale of the Trojans, which leads to their new successes. At the suggestion of Apollo, which Athena also agrees with, the hostilities will end with a duel between Hector and an chosen Achaean. The two gods, transformed into vultures watch the fight sitting on a tall oak tree – which is sacred to Zeus.
Silence falls after Hector's provocation. Menelaus prepares to enter the duel, but is restrained by Agamemnon, who sees that Hector is a stronger warrior. Nine other Achaeans stand up willingly to face Hector and Ajax, son of Telamon, wins the honour after a draw. He immediately prepares with joy for the conflict and asks the help of Zeus.

At the sight of Ajax, armed with a seven-pointed tower-like shield, Hector's heart tightens. The two opponents, after first bragging about their strength while recognising each other's value, rush throwing their spears. Hector's pierces Ajax's shield down to the seventh layer, while Ajax's pierces Hector's both shield and cuirass. The fight would go on, if Apollo and Athena didn't intervene. Both warriors exchange gifts as the duel isn't won by any of them.

The same night Nestor proposes a truce for the collection of the dead and the construction of a defensive wall. On the other side the Trojans decide to offer a compromise, (returning the stolen treasures, but keeping Helen) and asking for a truce. The compromise is rejected by Diomedes, but the truce is accepted and both armies honour their dead. Meanwhile the Achaeans finish building their great wall, which even the gods admire. However, the Acheans have not made the proper sacrifices to them...

Though Homer doesn't need an introduction, in case you'd like to refresh your knowledge about his life and work, you can read enough in published books, or online by consulting websites like: the Center for Hellenic Studies of Harvard University (using their search field), Encyclopaedia Britannica, the "Living Poets" website, even Wikipedia, Biography.com, or elsewhere. 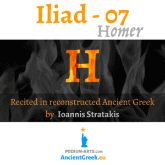 The recording contains the unabridged Ancient Greek text of the 7th rhapsody.
This recitation is trying to find a balance between dramatisation and metrical correctness. I've avoided excess on both sides: not to render it as mechanically rhythmic as it usually happens in educational context on all levels and, not over-dramatise it, as is often needed in live performances in larger venues. I hope this is a proper approach for this medium. 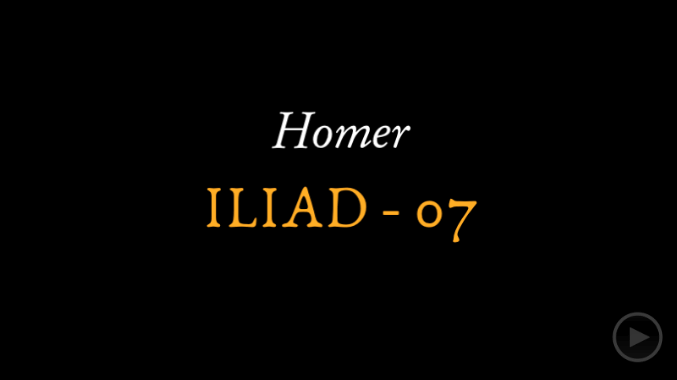