About rhapsody 20 of the Iliad

Armed Achilles with the Achaeans prepare themselves for the battle by the ships. The Trojans also prepare themselves on a high ground. Meanwhile Zeus summons all the gods in the Olympian palaces and exhorts them to participate in the battle; they can choose whom they support. He remarks that Achilles is able to sack Troy if they don't intervene.
The gods separate themselves in two groups. Siding with the Achaeans are Hera, Athene, Poseidon, Hermes and Hephaistus, while Ares, Apollo and Artemis, their mother Leto, and the river Skamander side with the Trojans.

Zeus gives a starting sign by way of thunder, while Poseidon moves his trident causing strong eartquakes, which terrify even the gods. Pluto asks him to stop with the trembling of the earth, as he doesn't want the dirt and pain of the underworld to be seen by gods and mortals. 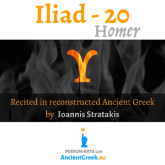 The recording contains the unabridged Ancient Greek text of the 20th rhapsody.
This recitation is trying to find a balance between dramatisation and metrical correctness. I’ve avoided excess on both sides: not to render it as mechanically rhythmic as it usually happens in educational context on all levels and, not over-dramatise it, as is often needed in live performances in larger venues. I hope this is a proper approach for this medium. 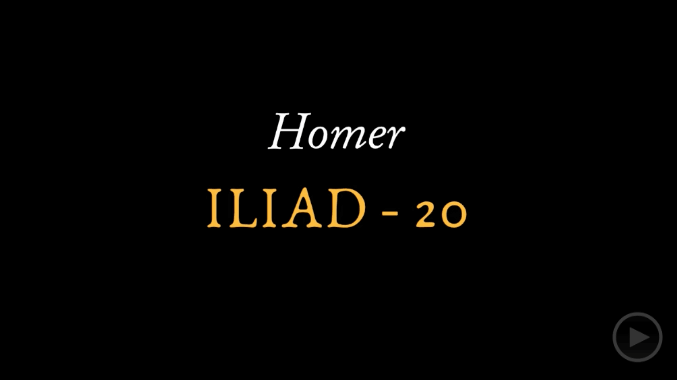