About “On the Refusal of a Pension”

Τhis speech is succinct and rich in reasoning, written for a weak citizen, who last year had received a pension and is now been accused by a fellow citizen, of illegally taking this benefit from the city, as he has physical skill and knows a craft which could provide his livelihood. The accused is justified by the perfectly structured speech of Lysias.

At first, the accused, aiming at impressing the jury, paradoxically thanks his accuser, for giving him the opportunity to account for his life. He claims to prove, on the one hand, that the indictment is false, on the other hand that the source of the accusation against him is envy.
Then follows the argument. E.g. the art he knows gives him some income, but not enough, while physical weakness prevents him from exercising it, also that he has not any children who could continue his work while taking care of him. He therefore points to the judges the absurdity of giving him the allowance when he was younger, while they might disapprove of it now that old age is added to his weakness.
He closes his argument by proposing to the prosecution, as evidence of his poverty, the “antidosis”, the exchange of property between accuser and accused, which he is sure the accuser will deny.
He then defies the category of his physical and hunting skill. To ride a horse is a relief to his pains and if he was so rich he would have his own horses and he would not have to ride his friends’.
Furthermore, he can not be characterized as arrogant, as this only fits the strong and the young. He, however, is none of the two. And the accusation that the bad guys are gathering in his workshop should be charged to all Athenians, as long as they all have the habit of gathering somewhere.
In closing the speech, Lysias focuses on the virtues of the accused and the sentiment of judges. He therefore asks not to take an unfair decision against someone who has been deprived of any office due to his weakness and at the same time no one could blame him as a court-man or being audacious or arrogant and a criminal. Since he hasn’t deprived anyone of anything and is governed by democratic sentiments, why now deprive him of the only good he can rightly enjoy?

You can follow the text online at the Perseus Library , or Loeb Library

Lysias, one of the most prominent orators of antiquity, was born around 459 BC. in Athens. He was taught the rhetoric art by the teacher Teisias at the time he was at Thourioi. After the Sicilian campaign, however, he returned to Athens. His democratic ideas, though, stood formed a hurdle at a time when the Thirty Tyranns were still in power. His brother Euthedemus was executed and Lysias fled to Megara. From there he helped morally, materially, and financially to the struggle against the Thirty. Thus, with the restoration of democracy, he returned to the city again, but never managed to secure the rights of Athenian citizenship. He then started working as a logographer. He was responsible for writing the speeches that would be delivered by his fellow citizens in various legal cases. He has written about 230 rhetorical speeches, of which only 34 are preserved. Most of them are forensic and have been delivered in court. The only speech delivered by himself in court is “Against Eratosthenes”, the murderer of his brother, Euthedemos. 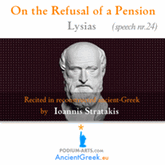 The recording contains the complete, unabridged Ancient Greek text of the oration “On the Refusal of a Pension”, also known as "In defence of the Invalid". After purchase you will be able to download the zip file, containing both mp3 and m4a formats. The m4a format offers better sound quality.

You can listen to the finishing paragraphs of the speech, an audio sample of the present audiobook by watching the following video. Thank you! 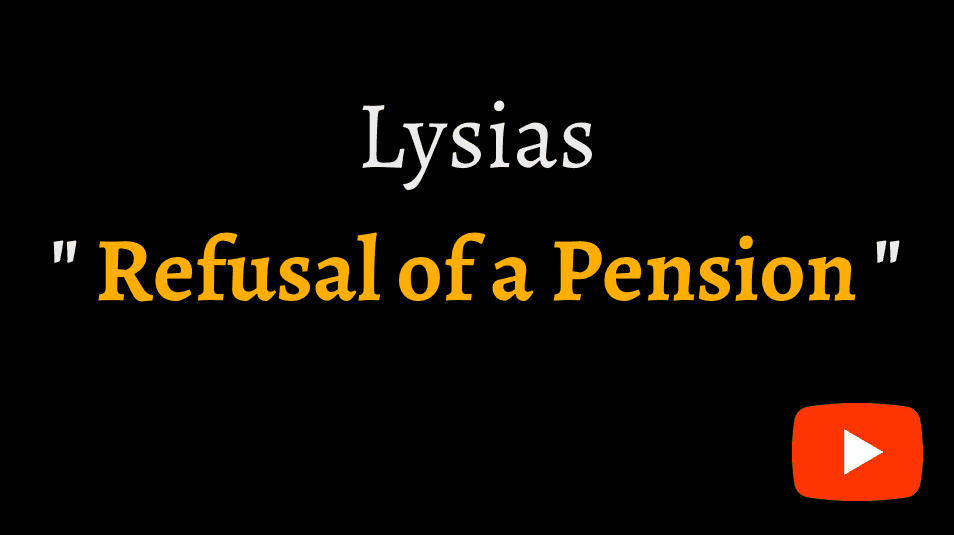