About Politics, book 1 of Aristotle

In book 1 Aristotle starts by defining «κοινωνία» and «πόλις», loosely translated “society” and “city-state”, as associations aiming at the highest good.
Different kinds of relationships define the kinds of association. Household, village… and finally the city-state, which ideally improves the quality of life by letting people attain the highest of achievements. Whoever doesn’t form part of a city by being totally self-sufficient and independent seems rather “either a god or a beast”.
These human relationships are categorized as “master-slave” (justified if only the relationship in beneficial for both), “husband-wife” (likened to statesmen who share equivocal freedom) and “parent-child” likened to “king-subject”, a relationship based on love and respect.
A great part of book 1 of Aristotle’s “Politics” is about the way people acquire whatever satisfies their basic needs. There is a natural and an unnatural acquisition. The former means things like shelter and food, acquired in different ways by pirates, farmers or hunters. The latter, the unnatural one, means the acquisition of money for its own sake and not simply as a means of exchange of goods.
...
The “Politics” by Aristotle is a well written treatise, with an easy to follow detailed and clear argumentation, which doesn’t present the listener/reader with the difficulties of quasi “decipherment” present in some other of his works that were meant as notebooks or manuals.

You can follow the text of Politics, book 1 by Aristotle online at the Perseus Library, or at archive.org.

Aristotle (Gr.: Ἀριστοτέλης), one of the most important philosophers of Antiquity, was born in 385 BCE in Stageira of Chalkidike. Born in a rich family he had the opportunity to get high education. From 367 BCE on and for about twenty years, he studied philosophy in Athens by Plato and also taught in his Academy. After the death of Plato he moved to the city of Assus in Asia Minor, where he taught philosophy until 345 BCE., when he accepted an invitation by Theophrastus to teach in Mytilene. In 342 BCE King Philippus asked him to teach his 13 years old son, Alexander. After the death of Philippus Aristotle returned to Athens and established the “Lyceum”, where he set his teaching forth. However, after the death of Alexander in 323 BCE and having been accused by opponents for disrespect, he retired in Chalkis. He died in 322 BC. from some stomach disease.
Aristotle left a lot of works. The works that have survived are distinguished in logical, physical, biological, psychological, metaphysical, moral, political, technological and various problems.
The Aristotelian works have included the following, which are not considered genuine: Physiognomy, About Miraculous Things Heard, About Colors, Mechanics, Rhetoric to Alexander and On Hearing. 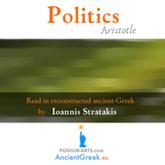 The recording contains the complete, unabridged Ancient Greek text of “Politics, book 1 by Aristotle”. After purchase you will be able to download the zip file, containing both mp3 and m4b formats. The m4b format is smaller in size (in MB’s) offering better sound quality, been bookmarkable as well.

You can listen to the 12th chapter of the 1st book of the "Politics", an audio sample of the present audiobook. Please, click on the play-button bellow and, if you wish, follow the Ancient Greek text lower on the page, or alternatively watch the video. Thank you! 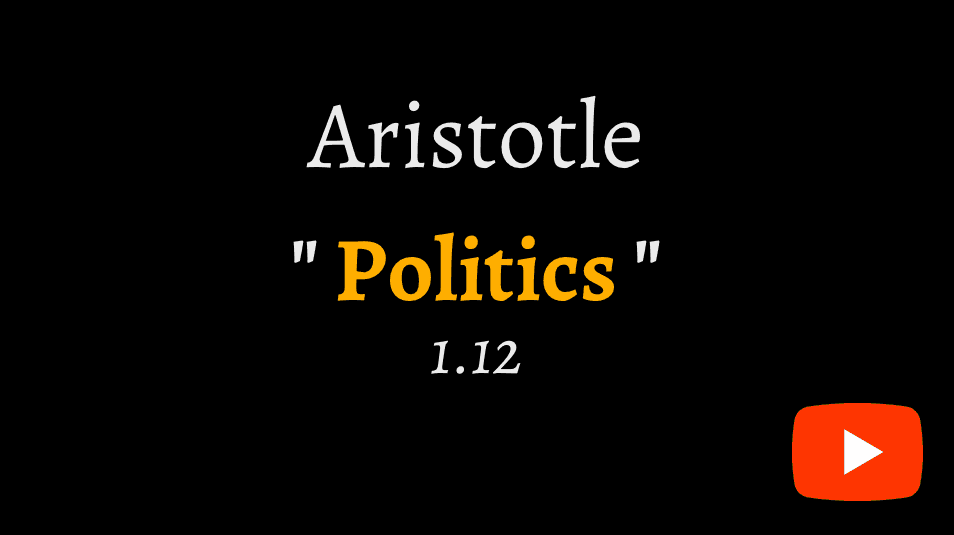