About “On Sense & the Sensible" by Aristotle

In his work “On Sense & the Sensible” (a.k.a. De Sensu) Aristotle examines the psychological phenomenon of sense (αἴσθησις) and sensible objects (αἰσθητά) in a rather empirical fashion. In the various chapters he argues about the faculties and energies of the soul (ψυχή), that sense is an essential characteristic of animate beings and examines the different senses. He exposes earlier opinions (of Democritus and Empedocles) and categorises the senses in relation to the four elements. Sight corresponds to water, hearing to ait, touch and taste to earth and smell to fire. Then colours are examined, with the main idea that the initial colours are white and black.
About taste and smell he states that they depend on three factors: earth, dryness and humidity, with two fundamental ones, sweetness and bitterness, while he sees a correspondence of the seven tastes with the seven colours. Especially, smells are of two kinds: good–pleasant and bad-unpleasant and the sense itself is one between the immediate ones: taste and touch and the indirect ones of sight and hearing.
The next matter is if senses are divisible as sensible objects are, that is, when these objects become very small and for this reason are not sensible any more. Also, if one can sense more simultaneously.

You can follow the text of “On Sense & the Sensible”, book 1 of “Parva Naturalia” by Aristotle, online at Archive.org

Aristotle (Gr.: Ἀριστοτέλης), one of the most important philosophers of Antiquity, was born in 385 BCE in Stageira of Chalkidike. Born in a rich family he had the opportunity to get high education. From 367 BCE on and for about twenty years, he studied philosophy in Athens by Plato and also taught in his Academy. After the death of Plato he moved to the city of Assus in Asia Minor, where he taught philosophy until 345 BCE., when he accepted an invitation by Theophrastus to teach in Mytilene. In 342 BCE King Philippus asked him to teach his 13 years old son, Alexander. After the death of Philippus Aristotle returned to Athens and established the “Lyceum”, where he set his teaching forth. However, after the death of Alexander in 323 BCE and having been accused by opponents for disrespect, he retired in Chalkis. He died in 322 BC from some stomach disease.
Aristotle left a lot of works. The works that have survived are distinguished in logical, physical, biological, psychological, metaphysical, moral, political, technological and various problems.
The Aristotelian works have included the following, which are not considered genuine: Physiognomy, About Miraculous Things Heard, About Colors, Mechanics, Rhetoric to Alexander and On Hearing. 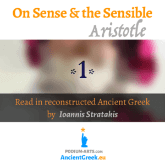 The recording contains the complete, unabridged Ancient Greek text of “On Sense & the Sensible”, book 1 of Parva Naturalia by Aristotle. After purchase you will be able to download the zip file, containing the work in mp3 format.

You can listen to the first two paragraphs of “On Sense & the Sensible”, an audio sample of the present audiobook. Please, click on the play-button bellow and, if you wish, follow the Ancient Greek text lower on the page, or alternatively watch the video, which is provided with a quick translation in English. Thank you! 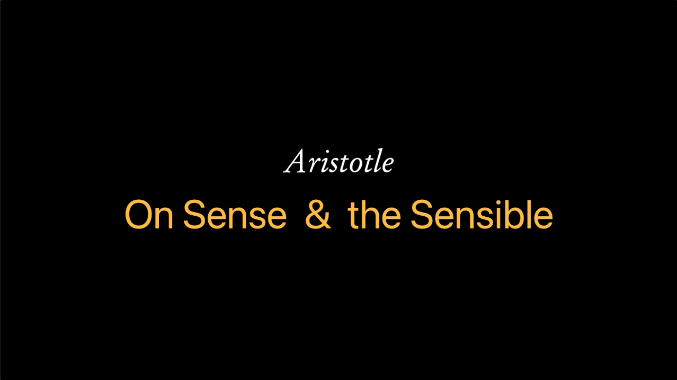