Pressing the green (Download) button opens a new browser tab, so you can follow the translation or the original text that follows below.

«We must show not only that the heaven is one, but also that more than one heaven is impossible to be and, further, that, as exempt from decay and generation, the heaven is eternal. We may begin by raising a difficulty.

From one point of view it might seem impossible that the heaven should be one and unique, since in all formations and products whether of nature or of art we can distinguish the shape in itself and the shape in combination with matter. For instance the form of the sphere is one thing and the gold or bronze sphere another; the shape of the circle again is one thing, the bronze or wooden circle another. For when we state the essential nature of the sphere or circle we do not include in the formula gold or bronze, because they do not belong to the essence, but if we are speaking of the copper or gold sphere we do include them. We still make the distinction even if we cannot conceive or apprehend any other example beside the particular thing. This may, of course, sometimes be the case: it might be, for instance, that only one circle could be found; yet none the less the difference will remain between the being of circle and of this particular circle, the one being form, the other form in matter, i.e. a particular thing.

Now since the universe is perceptible it must be regarded as a particular; for everything that is perceptible subsists, as we know, in matter. But if it is a particular, there will be a distinction between the being of 'this universe' and of 'universe' unqualified. There is a difference, then, between 'this universe' and simple 'universe'; the second is form and shape, the first form in combination with matter; and any shape or form has, or may have, more than one particular instance. On the supposition of Forms such as some assert, this must be the case, and equally on the view that no such entity has a separate existence. For in every case in which the essence is in matter it is a fact of observation that the particulars of like form are several or infinite in number. Hence there either are, or may be, more heavens than one. On these grounds, then, it might be inferred either that there are or that there might be several heavens. We must, however, return and ask how much of this argument is correct and how much not.

Now it is quite right to say that the formula of the shape apart from the matter must be different from that of the shape in the matter, and we may allow this to be true. We are not, however, therefore compelled to assert a plurality of worlds. Such a plurality is in fact impossible if this world contains the entirety of matter, as in fact it does.

But perhaps our contention can be made clearer in this way. Suppose 'aquilinity' to be curvature in the nose or flesh, and flesh to be the matter of aquilinity. Suppose further, that all flesh came together into a single whole of flesh endowed with this aquiline quality. Then neither would there be, nor could there arise, any other thing that was aquiline. Similarly, suppose flesh and bones to be the matter of man, and suppose a man to be created of all flesh and all bones in indissoluble union. The possibility of another man would be removed. Whatever case you took it would be the same. The general rule is this: a thing whose essence resides in a substratum of matter can never come into being in the absence of all matter.

Now the universe is certainly a particular and a material thing: if however, it is composed not of a part but of the whole of matter, then though the being of 'universe' and of 'this universe' are still distinct, yet there is no other universe, and no possibility of others being made, because all the matter is already included in this. It remains, then, only to prove that it is composed of all natural perceptible body.

First, however, we must explain what we mean by 'heaven' and in how many senses we use the word, in order to make clearer the object of our inquiry. (a) In one sense, then, we call 'heaven' the substance of the extreme circumference of the whole, or that natural body whose place is at the extreme circumference. We recognise habitually a special right to the name 'heaven' in the extremity or upper region, which we take to be the seat of all that is divine.

(b) In another sense, we use this name for the body continuous with the extreme circumference which contains the moon, the sun, and some of the stars; these we say are 'in the heaven'.

(c) In yet another sense we give the name to all body included within extreme circumference, since we habitually call the whole or totality 'the heaven'.

The word, then, is used in three senses. Now the whole included within the extreme circumference must be composed of all physical and sensible body, because there neither is, nor can come into being, any body outside the heaven.

For if there is a natural body outside the extreme circumference it must be either a simple or a composite body, and its position must be either natural or unnatural. But it cannot be any of the simple bodies. For, first, it has been shown that that which moves in a circle cannot change its place. And, secondly, it cannot be that which moves from the centre or that which lies lowest. Naturally they could not be there, since their proper places are elsewhere; and if these are there unnaturally, the exterior place will be natural to some other body, since a place which is unnatural to one body must be natural to another: but we saw that there is no other body besides these. Then it is not possible that any simple body should be outside the heaven. But, if no simple body, neither can any mixed body be there: for the presence of the simple body is involved in the presence of the mixture.

Further neither can any body come into that place: for it will do so either naturally or unnaturally, and will be either simple or composite; so that the same argument will apply, since it makes no difference whether the question is 'does A exist?' or 'could A come to exist?'

From our arguments then it is evident not only that there is not, but also that there could never come to be, any bodily mass whatever outside the circumference. The world as a whole, therefore, includes all its appropriate matter, which is, as we saw, natural perceptible body. So that neither are there now, nor have there ever been, nor can there ever be formed more heavens than one, but this heaven of ours is one and unique and complete.

It is therefore also evident that there is also no place or void or time outside the heaven. For in every place body can be present; and void is said to be that in which the presence of body, though not actual, is possible; and time is the number of movement. But in the absence of natural body there is no movement, and outside the heaven, as we have shown, body neither exists nor can come to exist. It is clear then that there is neither place, nor void, nor time, outside the heaven.

Hence whatever is there, is of such a nature as not to occupy any place, nor does time age it; nor is there any change in any of the things which lie beyond the outermost motion; they continue through their entire duration unalterable and unmodified, living the best and most self-sufficient of lives. As a matter of fact, this word 'duration' possessed a divine significance for the ancients, for the fulfilment which includes the period of life of any creature, outside of which no natural development can fall, has been called its duration. On the same principle the fulfilment of the whole heaven, the fulfilment which includes all time and infinity, is 'duration'-a name based upon the fact that it is always-duration immortal and divine. From it derive the being and life which other things, some more or less articulately but others feebly, enjoy.

So, too, in its discussions concerning the divine, popular philosophy often propounds the view that whatever is divine, whatever is primary and supreme, is necessarily unchangeable. This fact confirms what we have said. For there is nothing else stronger than it to move it-since that would mean more divine-and it has no defect and lacks none of its proper excellences.

Its unceasing movement, then, is also reasonable, since everything ceases to move when it comes to its proper place, but the body whose path is the circle has one and the same place for starting-point and goal.» 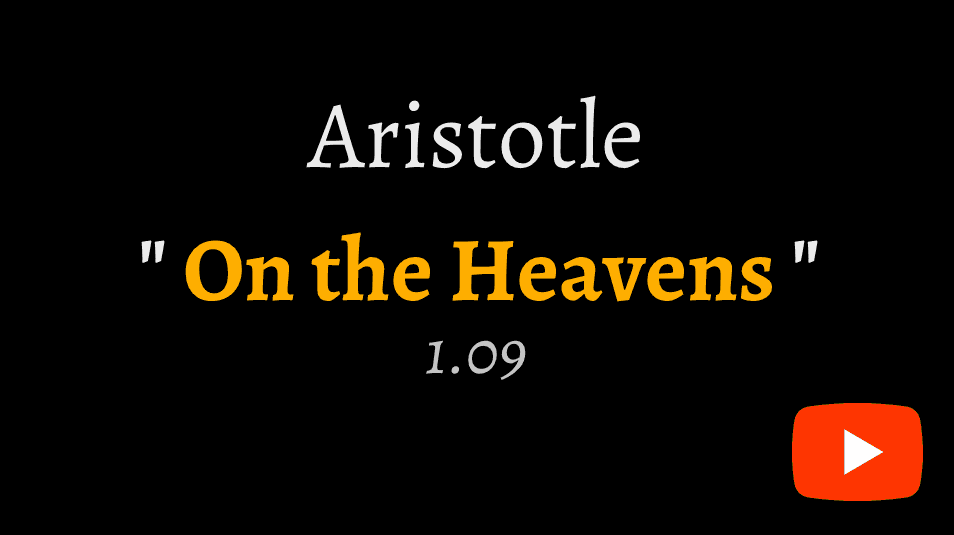