The only work of Parmenides that has survived to our days are fragments of his poem, all of which are recited in this audiobook in the original ancient Greek text (reconstructed pronunciation).
Though only fragmentary, the poem has intrigued philosophers for many centuries. It forms the base of what is now known as “Ontology”.

The beginning describes the first person, the “I” character, being carried away in a chariot moved by mares and driven by the Daughters of the Sun. The chariot reaches the Gates of Day and Night, where the “I” is welcomed by a Goddess, who is kindly explaining in the poem what we call “Parmenidean Philosophy”…

The correspondence between images and symbols in the preamble is a game as pleasant as it is instructive, that in its turn also illuminates the theories revealed through the words of the Goddess and the thoughts expressed in the poem. Some see e.g. in the form of the horses the five senses and based on this, seek a fitting desymbolization of the other elements. Others like to discern a relation of the poetic content with the ancient mysteries and so on. As is often the case, I believe that the value of the work increases, when after coming in contact with it, one goes after their personal interpretation, however partial it might be.

You can follow the original text online at the Wikisource, an English translation can be found at Archive.org.

Parmenides was born between 540 and 510 BCE in Elea (Velia in contemporary Italy) at that time a Greek colony and died in 450 BCE. He has been an influential Pre-Socratic philosopher, writing and teaching on metaphysical matters. His only known work is a poem in epic form, titled "On Being" a/o "On Nature" "the Poem" recorded here.
More information about his life, work and philosophy can be found among others at Philosophy Basics, Ancient History Encyclopedia, the Pre-Socratics' Summary at Sparknotes, internet Encyclopedia of Philosophy. 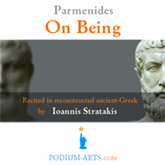 The recording contains the complete, unabridged Ancient Greek text of the poem. After purchase you will be able to download the zip file, containing both mp3 and m4b formats. The m4b format is bookmarkable and offers better sound quality.