What a joy is it to witness the discovery of a thousands of years old poem in your lifetime and what an excitement must Prof. Dirk Obbink must have felt overlooking that ancient papyrus! He is a happy man and made many people happy too.

The new piece is challenging in many ways, that the specialists have to check and it’s challenging for me too, but in another way.
In order to render it one needs to know, or imagine, to whom it is addressed, be it anything between your own inner self, a vast public, nature, a god and what not… Trying to make sense by delivering written signs in spoken form is as pleasurable as it is complicated, especially when nobody speaks this ancient dialect.

From the way the text is structured, I have the feeling that the poem is addressed to the little brother of Sappho himself and not to “someone” or “their mother”, as is being suggested due to lack of any relevant direct reference. If the choice is between 1) a mediocre poem of a young Sappho complaining to strangers about a chattering little boy and 2) a tender caring sister speaking directly to a sad little brother in a masterly manner, I choose for the second option…

Sappho’s, or whatever is left of her oeuvre, is a poetry that talks about delicate stuff in a way that also comes over as such. She doesn’t shout, she doesn’t speak to crowds, she shows understanding, she owns a big inner space. But what strongly leads me towards choosing the context of her addressing the little Larichos is the closing stanza. There she speaks in the third person, which might apparently lead a scholar to suppose that she’s indeed addressing a third person. Well, having grown up in Greece, I remember also myself sitting on the knees of a dear one trying to sooth me by whispering, or making fun about the little miseries of a young me, in the third person. Take it as a way of unobtrusively instructing the youngsters, without showing your own irritation or anxiety and without giving direct orders that would just increase the sadness or aggravate a feeling of being abandoned.

This poem is a work of art and as such, any personal bond with it automatically gives it existential rights. While the specialists continue with their own task, which might finally demand and deserve a different rendering of the poem, till then the scales tip only in one way for me.
My Sappho, may be younger but not less lofty! Even if the poem might be proven a hoax, it is a successful one.

Below is a recorded rendering of this “new” poem, recited in reconstructed ancient Greek, by Ioannis Stratakis. An English translation of the "Brothers Poem" comes first. You can follow the original text farther below on the page.

And you keep nagging of Charaxos’ coming
with a full ship. But these matters, I think, Zeus
knows and all the other gods; so you don’t need
to think about them,

and find us whole. All the rest
let’s leave to the gods;
for peace out of great gales
soon follows.

For those that the king of Olympus wants,
he’s already sent an angel to deliver
them from pains; and they are blessed
and very happy;

And we, if Larichos lifts his head,
and certainly ever grows to be a man,
we shall, from such great sullenness
quickly be released. 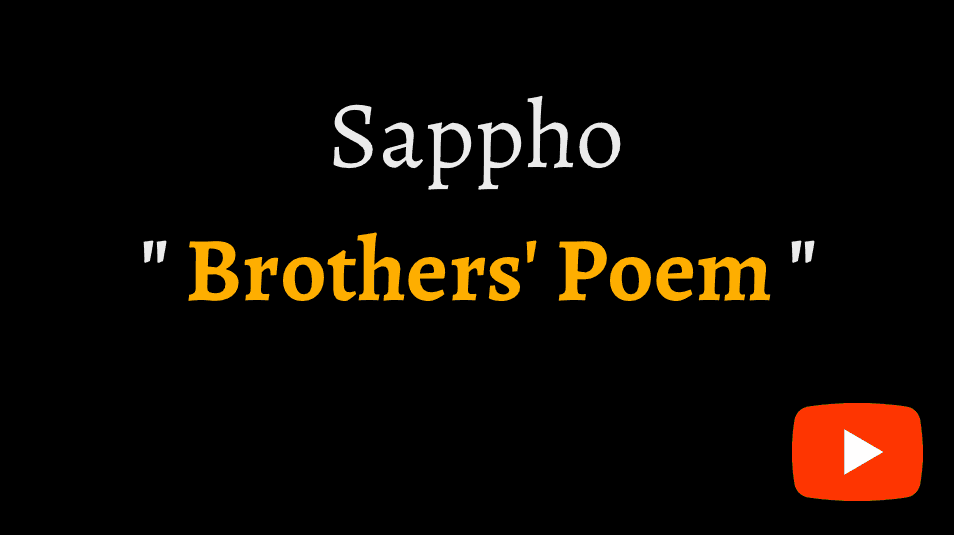